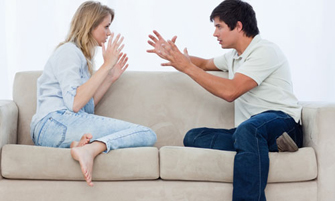 Scientists at the Institute for Behavioral Medicine Research at Ohio State discovered after more than two decades of research how stress including arguments can alter the levels of certain hormones in the blood that can weaken one’s immune system and increasing their vulnerability to disease. This was especially true for women as men often “tune out” their partners in a disagreement. According to Dr. Janice Kiecolt-Glaser, a scientist in the research, “We’re not saying that conflicts in marriage are bad necessarily. They’re completely normal. It’s the way the couples disagreed that was later related to a rise in hormone levels and a drop in immune function. It’s the quality of the disagreement.”

When people are in a reactive state while arguing they often shift into unwholesome emotions such as blaming, criticizing, judging, attacking or finding fault in order to justify their position. Once a person falls into these negative reactions they can become frozen or stuck in one of the three corner stones of a power struggle – dominating, manipulating and/or controlling. When this happens it leads to a breakdown in communications. So how can you stay centered and nonreactive when you’re in a heated conversation? Well the process begins by becoming a Mindful Listener.

The object in resolving a conflict is ideally for both individuals to start practicing mindful (meaning being in the present) listening and speaking. The first step is to recognize that you are in an unwholesome or unproductive pattern. After you acknowledge this aspect it is then important to categorize what the power struggle is about and to give it a title. For example, most couples argue about money, sex, time, responsibilities, and attention, so you could be fighting about one of these issues.

After you have established the cause of the communications breakdown the next step is key, as this is where you cut through the knot of the power struggle to address all aspects of the conflict that are tied up in it. To achieve this I recommend to my patients a simple mindful listening exercise. Mindful listening means being totally in the present and aware of not only the words but also the body language and actions of the other person. First, person A is the speaker who starts by talking about what is on his/her mind. Person B is the listener who listens in a mindful way and only after Person A is finished sincerely responds with, “I heard everything that you said and I will be aware of all your thoughts, feelings and perceptions from this moment forward.0 Then reverse the roles with Person A being the listener. By learning to deeply and sincerely listen to the other person you can discover where you are stuck in the conflict.

Once you and your partner understand the root of the conflict it is much easier to shift out of a reactive mode. Now the two of you can work on creating a new or different perspective to what isn’t working in the relationship. This unique approach involves a different way of speaking in order to shift your involvement. For example after you have been able to unravel the strands of the conflict you and your partner can take turns saying to each other, “I recognize that what you’re saying is ¬¬¬______ and the action that I will take to create a shift is ________. What I promise to do differently is _______ and the request that I have for you in return is _______.”

As you both develop wise listening and speaking skills you’ll start to notice when you’re tempted to respond to each other with cruelty and sarcasm, and you’ll instantly remember that you want to let go of that old behavior pattern. You’ll begin to enhance the new neural network in your brain that fosters an awareness of your forthrightness and strength, and open up to your compassion and kindness. You’ll stop feeling guilty and denying your tendency to be sarcastic, because your compassion toward yourself and others will dissolve your desire to issue a cutting remark. Then, when your spouse or coworker makes a comment that you disagree with or that makes you uncomfortable, you’ll be able to consciously choose a new, more wholesome and productive way of responding, changing the tenor of your relationship with them and fostering better relationships.