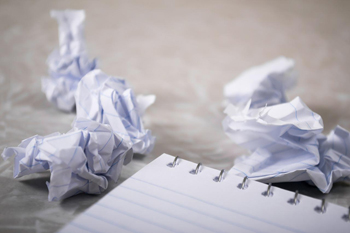 In the forty years that I’ve been working as a creative coach and a mind-body psychotherapist I’ve discovered that blocks to creativity and change can be rooted in old losses or trauma and can arise unexpectedly.

That’s what happened to one of my clients who was a writer who had been successful in her craft for many years but had suddenly developed writer’s block. When she came into my office, she reported that she felt as if she were inside a large block of ice and her arms and hands were frozen. She had no ideas and would stare at her laptop screen paralyzed, unable to type more than a few sentences before deleting them. After I took her medical and psychological history over a few sessions, I recognized signs that she might be dealing with unconscious trauma and abuse.

I knew my client had to release the pain and afflictive emotions and harness them to use in a pursuit of her own choosing and that doing this healing work could help her get to a new level in her writing—I’d seen it happen with other clients. I felt confident that Somatic Experiencing work would help my client liberate herself from her creative block. As we worked together, I had her meditate and focus on her “blocked” feeling. Where did it reside? What were its qualities? As she identified the blockage, her shoulders rolled forward, and she bent in on herself as if she were frail and frightened. She began talking about when she had been molested by a family member, a memory she had not retrieved for many decades.

As we worked together, she began to have dreams of scenes from her screenplay, and
upon waking, she felt renewed and eager to work. Soon, her writer’s block began to melt away. My client’s story illustrates that sometimes, a feeling of being stuck in a rut—a block—can be connected to something deeper that our unconscious needs to attend to. Towards the end of our therapy, as my client was writing again, she told me that it felt as if the ice blocks had melted and become streams and rivers of beautiful words.

Emotions don’t just reside in your brain. You experience them in your body as well as your nervous system. Even if you don’t feel you’ve experienced a trauma, emotions can get stuck energetically in your body. A mindfulness meditation practice and mindful movement, such as yoga and Tai Chi can help you discover insights that might include past trauma, and you might be able to release the emotional energy related to trauma by using these techniques. Many people though find it difficult to access their emotions. They feel numb or minimal emotion even when in a situation that we would expect would cause a strong emotional reaction.

Here are four techniques from my book, Core Creativity to help you get in touch with your emotions:

These activities can often bring your emotions and sensations into your consciousness. You might find yourself tearing up over a piece of music or when reading a passage in a book and decide to explore why you were so moved. Did a forgotten memory resurface? Did you connect with an aspiration you set aside long ago? If you start to cry about a character’s emotional pain in a book or movie, you might find you’re ready to reflect on your own emotional pain, having released some of it through crying.

One thought on “How to Mindfully Break Through Creative Blocks”