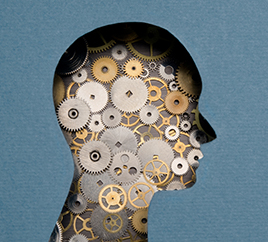 Most of us were taught that creativity comes from the thoughts and emotions of the mind. The greatest singers, dancers, painters, writers, and filmmakers recognize that the most original, and even transformative, ideas actually come from the core of our being, which is accessed through an “open-mind consciousness.”

In ancient traditions, open-mind consciousness was considered to be a spiritual awakening, the great enlightenment that dissolves the darkness of confusion and fear, and ushers in peace, happiness, clarity, and contentment. Today the notion that there’s one formulaic way to achieve this spiritual awakening and creative vibrancy has been blown apart. You don’t have to run off to a monastery or practice meditation for thirty years before attaining a breakthrough. A few years ago, I had a client, named Sarah who’d completely given up on psychotherapy until a failed suicide attempt convinced her to try it one more time. I urged her to begin a mindfulness practice, and she agreed. After several months—not years, but months—she had an extremely powerful experience while meditating. As she described it, she felt a rush of light and energy infuse her body, and experienced an ineffable sense of the presence of the divine, the cosmos, and a collective consciousness. After this transcendent experience, Sarah who’d been overweight to an unhealthy degree, lost several pounds, became more engaged by her work and closer to her friends, and was no longer suicidal. It was a major turning point for her.

What Sarah described has been called not only “open-mind awareness” but also, in the West, a “peak experience,” “being in the flow,” or “being in the zone.” I call it accessing your “core creativity,” because I believe that deep inside every person lies this potential for connecting to a universal flow of knowledge and creativity that’s boundless and expansive. Our individual thoughts and memories are a part of this greater, larger resource.

Just as an athlete who’s in condition has the muscle tone to be able to spring into action instantly, someone who regularly accesses their core creativity becomes creatively toned. For this person, the faucet to this remarkable flow of inspiration opens up easily, naturally, and often, allowing spontaneous and dramatic breakthroughs. When you’re creatively toned, instead of merely dipping your toe in the water and playing it safe, you’re willing to be utterly daring. Knowing this, you can navigate through a sea of self-limiting thoughts and transform such unwholesome beliefs as “I had my chance and blew it,” “It’s too late; my time is over,” “I’ll never be happy again,” and “I can’t.”

Here are 6 ways you can stimulate and tone your creativity from my book, Wise Mind, Open Mind.

One of the most effective ways to become creatively toned and start accessing core creativity is through a mindfulness meditation practice. Mindfulness allows us to listen and pay attention to what we might otherwise overlook—whether it’s a fresh idea or a new way of perceiving a situation—enhancing our creativity and letting go of our obstacles to innovation. Many people are intimidated with the idea of meditating with excuses of not having the time or ability to quiet the mind. Really all you need is 5 to 20 minutes a day and there are many mediation CDs that can help guide you through the process. In fact my CD Mindful Meditations for Creative Transformation was created to specifically help one access their inner resources.

Dabbling in the Arts

Our culture’s overemphasis on fame and great success often turns people away from their creative inclinations, because they feel that if they can’t reach a professional goal with their writing, singing, or painting endeavors, they shouldn’t bother. What they don’t realize is that simply dabbling in the fine arts, with no specific goals or intentions, awakens our ability to approach life with greater openness and curiosity. In the same way that mindfulness practice jogs the areas of the brain associated with well-being, optimism, and compassion for yourself and others, so too does immersing yourself in any artistic exploration or enjoyment jog your creativity.

Immersing Yourself in Nature

Experiencing nature can awaken in you a sense of vitality and infinity, which becomes a path to your core creativity. Without conscious thought, you can look up at the astonishing number of stars in the sky or leaves on a single tree in a forest, and feel a sense of vastness and spaciousness. As you gaze at the heavens the ancients observed, knowing that humanity throughout history and across continents has pondered these very stars, you experience being a part of something larger than yourself that feels as if it has always existed and always will.

In ancient times, sacred spaces, such as churches, temples, and sites for group rituals, were built on land whose features evoked a sense of spirituality. Treks to places like Machu Picchu, the temples of India, and Stonehenge have become more popular for Westerners who yearn for a sense of connection to their divine nature. Yet sacred spaces can exist wherever you feel a sense of spaciousness and connection to the creative, life-supporting forces of the universe. Arranging the space in your home or office to bring in light and nature will help you feel expansive and access your core creativity as you open up to your important role in all of creation.

When the Irish band U2 wanted to reinvent their music, they traveled to Berlin, a bustling, gritty city unfamiliar to them, and soaked in the atmosphere, allowing its energy to infuse their songwriting and sound. Similarly, a famous actor I once spotted in an art museum stood before a painting for a good ten minutes before throwing his arms out and his head back, and standing for many more minutes, as if opening his heart to a beam of creative energy emanating from that painting. We all have this capacity to open to the vital forces around us and allow ourselves to take them in, mingling them with our own passions.

Many forms of physical movement can be an entrée into open-mind consciousness. Somatic therapy or somatic disciplines such as martial arts, tai chi, and yoga are the most well-known ways of quieting the rational mind and opening up to the intuitive mind and its connection to the numinous creative force. Any physical activity that involves discipline and a slowing down of thoughts, from skiing to dance, actually creates new neural pathways in your brain that become roads to innovation.

Becoming creatively toned can lead to a breakthrough in parenting or relating to others, or it can make you feel vitalized and fully engaged in the mundane chores of the day. The Buddha said that to find enlightenment, one must chop wood and carry water, meaning that the deepest, more purposeful life may not be one dedicated to an extraordinary cause or endeavor, but one that’s simply lived with a deep sense of awareness and openness to both the known and the unknown. A passion for discovery, for embracing the new and the unfamiliar can help you transform your life in ways you never dreamed possible, as you find the strength to move out of fear and resistance and into something new.