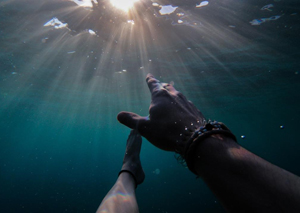 Doesn’t everyone desire happiness, joy, bliss, and peace? Then why are so many people stuck in unhealthy or unfulfilling jobs and relationships?

Traditionally, we’ve been told that to achieve happiness, we should use our minds to figure out what would make us happy and then work hard to achieve our goal. The problem is that even the sharpest, most clever mind is limited in its ability to create opportunities and see possibilities. Without guidance from the heart, we’re merely playing notes on a piano, not composing a melody. To move out of suffering and back into contentment and joy, we must listen to the music that calls to us from our hearts and go where it takes us.

Some people are able to embrace the process of transformation so easily that they evolve seemingly without effort, while others get stuck, afraid to make a move, hoping in vain that the change they desire will come about magically and painlessly. For those that get stuck their ego, or false self, often presents them with a long list of arguments for fighting the changes they long for or avoiding the changes that requires them to break out of their comfort zone—even if the cost is their own happiness.

Most people desire change, and even radical change, because their lives are out of sync with their most heartfelt longings. Yet, when they’re faced with overwhelming evidence that it’s time to move on, to let go of what was and enter into their deepest, or core, creativity, where all sorts of overlooked possibilities will begin to reveal themselves to them, they freeze in fear. Resistance takes over. To access their power to transform, they must start by exploring and dissolving their deeply rooted resistance to change.

I don’t believe that we can ever get rid of certain resistances or emotions so instead of trying to overcoming a hindrance I write about the importance working with mulching them. There is an ancient Buddhist story that illustrates what I mean by mulching. In the parable two farmers are living next to each other. One farmer takes all of his horse manure and keeps throwing it over the fence into the other farmer’s yard. About six months later, he notices the other farmer’s tomatoes are gigantic, his pumpkins are huge, his corn is green and his front yard is filled with tall grass.

The first step in embracing your resistance is to identify it and also check if you have any hidden hindrances. Then it is important to understand the payoffs of resistance as these are what is holding you back from moving forward. There are five basic payoffs that I call the demons of the ego or egoic mind. First by resisting change, we can avoid the unknown. What’s familiar may not be terribly comfortable, but sometimes it seems that the devil we know is better than the devil we don’t know. We fear that venturing into the unknown will cause us to discover painful secrets about the world and ourselves that have been hidden from us. Secondly we can avoid being judged as “strange.” When parents are frightened by their child’s differentness, labeling them as “strange,” they’ll usually try to stifle his creativity. The child, sensing their disapproval and fearing abandonment, can shut down his creative flow and then either tries to conform to his parents’ expectations or acts out, claiming not to care what anyone thinks of him.

Another payoff is that we can avoid failure. When we fear failure, we tend to overestimate the risk we’re taking and imagine the worst possible scenario—the emotional equivalent of our parents deserting us as children. Conversely, we can also want to avoid success. Strange though it may seem, a fear of success can cause as much resistance to change as a fear of failure can. While you may consciously long for a promotion or hope that your romantic relationship will result in marriage, unconsciously you may be afraid of what will happen if these changes occur. The last payoff is that we can avoid feeling guilty. If we take a risk and make a change, we may feel guilty because we’re contradicting what others think we should or shouldn’t be doing with our lives.

If your resistance is stronger than your desire for a better situation, you must find your courage and delve deeply into your psyche. There, you can discover this hindrance, break it apart, and access the fuel of your passion. This passion will pull you out of your routine and resistance, and into the creative process, opening your eyes to infinite possibilities. Freed from the burden of creating avoidance behaviors and repressing your anxiety and fears about change, you’ll be invigorated.