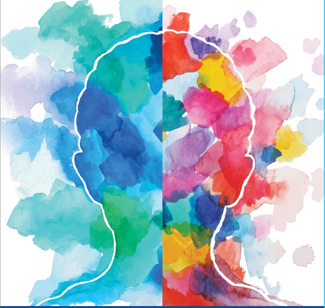 (Excerpt from Dr. Ronald Alexander’s book Core Creativity: The Mindful Way to Unlock Your Creative Self)

Whether you sit quietly, walk meditatively, or take other actions that allow you to absorb stimulation from your unconscious or from the world around you, you are likely to slip into open mind at some point. From there, you recognize that you have access to ideas that were hidden from you when you’re in an ordinary waking state. Some say that you’re not just drawing in ideas and insights from what’s in your personal unconscious but from something larger—even a spiritual source perhaps. For example, the ancient Greeks believed that creative ideas came from nine goddesses who bestowed inspiration on humans.

I’ve always been fascinated by how creative artists describe their process. Inevitably, they talk about being in a state of open mind where the download of core creativity can happen, even though they use their own words to explain this experience. James Taylor said in a 2015 Hemispheres magazine interview, “Given enough empty time, the songs show up. I’ve often said that it’s an unconscious and mysterious process, my type of songwriting. You really are just waiting to hear it, and you have to be in a place where you can receive the song, more than generate it. There’s just something about songwriting. It’s like a musical puzzle or a math problem. When you solve it, it’s like you’re being surprised by your own subconscious in a way. That’s an unparalleled delight.” Robbie Robertson of the Band said in the documentary Once Were Brothers, “The creative process is a process catching you off guard. You write about what you know, where you have been, who you knew and know. . . . Creativity comes from the womb of emptiness.”

In a 2020 interview for AARP: The Magazine, Bruce Springsteen said, “You have your antenna out. You’re just walking through the world and you’re picking up these signals of emotions and spirit and history and events, today’s events and past remembrances. These things you divine from the air are all intangible elements: spirit, emotion, history. These are the tools of the songwriter’s trade before he even picks up the pen. . . . People who are attuned to that atmosphere usually end up being artists of some sort. If you are attuned you pick up on the information and with the desire to record, you learn a language to do so whether it’s paintings, films, songs or poetry.

Helen Mirren said in an interview with Robert Love for AARP: The Magazine, “I would say there is a spirituality in being a human being that is connected to the imagination in some way. . . . I find the engagement in the imagination very appealing.” Love points out that in her autobiography, Mirren wrote, “The theatre became my religion, and I wanted to serve it.” And songwriter Leonard Cohen summed up absorption and surrender to open mind in his song “A Thousand Kisses Deep,” written with Sharon Robinson, where he says, “You lose your grip and then you slip into the masterpiece.”

What are you surrendering to when you experience a downflow of core creativity? Painter Ronnie Landfield says, “My work comes from my connection to the universe.” Actor Jodi Long says, “Whether I am singing, dancing, playing an instrument, or acting, I am just channeling the Universal energy through me.”

You might believe that ideas are coming only from your own unconscious mind, but in my many years of working with creative people, I’ve found that curiosity about the ultimate origin of the ideas and insights that come to us, as well as the power of core creativity and intuition, can lead to explorations about one’s spiritual nature. That can result in valuable discoveries and help people find a sense of purpose, optimism, and comfort. It’s a payoff you might not be aware of as you use the ideas in this book to expand your creativity to help you with transformation and bringing your dreams to fruition, but it’s one I hope you’ll keep in mind as you read more about open mind and what it offers you.

Stillness, exploring, observing, researching, learning, and working with dreams and intuition are all essential components of taking in stimulation and ideas that can help you, but then you have to take action and work with the ideas that come to you or generate ideas through rituals of action. Even after Paul McCartney dreamed the entire melody for “Yesterday,” he had to come up with lyrics and an arrangement. While inspiring ideas and insights may have come to you as a result of tapping into your core creativity and intuition, you have more work to do to turn those ideas into something bigger, building on them as you continue to tap into your core creativity again and again.