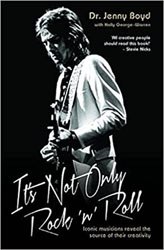 I had the pleasure of interviewing the lovely and unique Jenny Boyd, author of It’s Not Only Rock’n’Roll: Iconic Musicians Reveal The Source of Their Creativity. Jenny was a model with her sister Pattie Boyd in the psychedelic 60’s. The two of them where known as the original, “Apple Music Girls,” living in an exciting time of music, and exotic travels. Her sister married George Harrison and then Eric Clapton. Jenny was married to Mick Fleetwood and drummer Ian Wallace. She also spent time in India with Maharishi Mahesh Yogi, the Beatles, Beach Boys and Prudence Farrow. Jenny has lived an extraordinary life living so close to the creative flow and has authored a wonderful book on creativity by interviewing 75 iconic musicians and singer songwriters about their work.

R – Jenny, what gave you the inspiration to write this book?

J – I was fascinated from a very early age by what made people creative and having been surrounded by musicians most of my life, it was an obvious choice, to ask them the questions I’d always wanted to know about the creative process. I believe musicians have a very special gift. They are the torchbearers, the spokespersons of our time. Their songs express not only the feelings and ideas of the individual but of each generation and its culture.

R – Did you find any common threads in what they had to say?

J – All of the seventy-five musicians, except for two had nurturing parents or grandparents who were supportive of their creativity. I found this was an important element and because of this nurturing environment from a young age, it gave them the courage and faith in themselves that is needed to pursue their creative yearnings, to delve into the depths of their unconscious.

R – You interviewed the late psychologist Frank Barron, a pioneer in creative research. That must have been pretty inspiring for you?

J – It was. He told me that creative individuals are persons whose dedication is nothing less than a quest for ultimate meaning. What is enjoined with them is to listen to the voice within and allow it to express itself.

R – The voice within is the creative collective that Swiss Psychologist Carl Jung referred to as the collective unconscious.

J – Yes, musicians seem to have no fear of exploring the unknown, entering into the creative world of the unconscious. They all have this incredible drive to create. Keith Richards said, “If you’re a musician, you can never really stop playing, even if you don’t do any gigs or you retire. You’re still in a way playing inside yourself.” It’s like Jung said, “Creative power is mightier than its possessor.”

R – We’re verging into the spiritual here. Were musicians aware of that side of themselves?

J – Absolutely. They all described in different ways what Abraham Maslow called a Peak Experience. Most of them had never spoken about it before, and some, such as Eric Clapton had no idea anyone else other than himself had experienced this feeling. They described it as a sort of mid-way point between conscious and unconscious, a place of timelessness, a dream state. It gave them a feeling of awe and reverence, being given a gift, being used as a vessel and at times the feeling of going into a trance. To get to that state many of them said they had to surrender to the power of the creative unconscious.

J – That’s right. Mindfulness meditation allows you to flow into a state of Open Mind to access your creativity but as soon as the ego takes over, and tells you you’re special or the best meditator in the world, it all disappears! You need to surrender and let go in order to hold the space but once you start grasping at it you lose the feeling of peak oneness.

R – Did these musicians say they had any special times of the day or week they were more creative or any particular environments?

J – George Harrison said he always liked to write in the early hours of the morning, when everything was still and everyone asleep.

R – That’s a good time to practice mindfulness meditation as well. In Asia and India this is the time of day where the prana of the earth and universe is felt to be the strongest.

J – As you know, George was a meditator, and another musician, flautist and saxophonist Paul Horn who was in India with us enjoyed the practice of regular meditation.

R – That’s right. You went to India with the Beatles. Were you able to witness their creativity at work?

J – Yes, I was very lucky. I would sit with my sister Pattie and the rest of the Beatles on the roof of our bungalow, watching and listening to them as they talked about their mediation or not being able to sleep at night. Then they’d start playing their guitars creating a song that would later be heard on The White Album. It was fantastic.

R – What about drugs and alcohol? I notice you have a chapter on that in your book.

J – Most of the musicians who talked about drugs and alcohol said that to begin with it would diminish the anxiety that can stall or prevent the creative process. Being high is like being put into another world, one without form or structure, similar to the unconscious. It would help them get the conscious mind, the busy mind, out of the way. But for many the tool became the end rather than the means. As Eric Clapton said, “The booze becomes more important than the doors it opened, so that’s the trap.” A lot of these musicians had stopped drinking and using when I interviewed them and were able to talk about the difference in their creativity since stopping.

R – And do we all have the potential to be creative?

J – Yes. Joni Mitchell said, “The net with which you capture creativity is made up of the threads of your alertness.” It’s about expressing yourself. As psychologist Rollo May says, “If you do not express your own original ideas, or listen to your own being, you will have betrayed yourself.”

R – Jenny, your book not only shares the context and development of these iconic musicians but also shows that anyone who takes the time to slow down, relax and listen to their inner self can tap into the richness of this creative collective. So taking time for a Mindful Pause throughout the day really is a great way to turn on the creative self. Thank you for writing such an inspiring and interesting book.